I’ve been researching the Entertainment Memorabilia auctions at Bonhams, and it was EXACTLY 10 years ago today that Tom’s scarf, last worn in Shada, was sold along with a number of other classic series items.

Here’s what was on offer.


Here are just the lots relating to the Fifth Doctor era 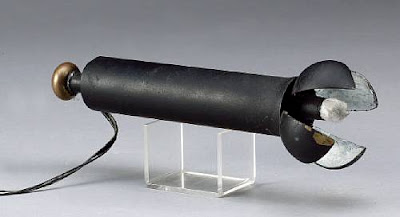 Lot 611
'Dr. Who': The Master's 'tissue compression eliminator' (miniaturising gun), the prop in black-painted brass with electric wiring, as used by Anthony Ainley throughout the 1980s in his portrayal of The Doctor's nemesis, 23cm (9in) long.
Estimate £700 - 900
Sold for £1,440

Lot 617
Two Radio Times cover proofs,
1983, marking the 20th Anniversary of the programme, one for the regular issue, the other for a Special, each mounted and framed and with inscription Presented To John Nathan Turner By Radio Times
Estimate £100 - 150
Unsold

Lot 622
'Dr. Who': a Tardis roundel,
fibreglass, with traces of black and grey paint, indicating use in the Tardis of both The Doctor and The Master, believed to be the last surviving example from the original Tardis, 55cm (21½in) diameter
Estimate: £500 - 700
Unsold 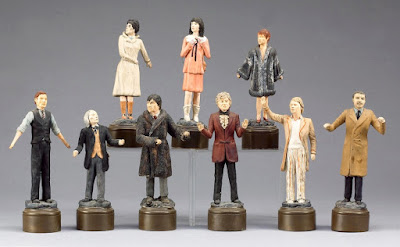 Lot 628
Nine miniaturised character figurines,
a unique set made for the 20th Anniversary Special edition, 'The Five Doctors', comprising the First, Second, Third and Fifth Doctors, Susan Foreman, Sarah Jane Smith, Tegan Jovanka, the Brigadier and Vislor Turlough, each in painted modeller's clay on circular metal base, one damaged during filming, the tallest 23cm (9in) high
FOOTNOTES
Broadcast in the UK on 25th November 1983, this anniversary edition was actually premiered two days earlier in the US.
Estimate £3,000 - 4,000
Sold for £3,600
Posted by Steven Ricks Tailoring at 17:07