It‘s only been a week since the last Tenth Planet event, and already I’m off to Barking library again to meet up with almost a dozen Doctor Who celebrities.

It was great to speak to some of these guys, as the queues were often not too long so you could have the opportunity for a bit of an extended chat.

The event is also very reasonably priced. Each autograph (regardless of notoriety) is £10. But if you buy four, you get a fifth for free - which at £8 a hit makes them the cheapest I’ve seen anywhere.

The stand-out attendee for me (and I think a lot of people) was Frank Windsor, who’s first of two Doctor Who appearances was alongside Peter Davison.

FRANK WINDSOR His most famous role was as Detective Sergeant John Watt in Z-Cars from 1962-65, and thereafter its spin-offs Softly, Softly and Softly, Softly: Taskforce from 1966-76. From 1987-89 he starred in the comedy drama Flying Lady written by Brian Finch.

But to Doctor Who fans he is best known as Ranulf Fitzwilliam in The King's Demons and Inspector Mackenzie in Ghost Light. 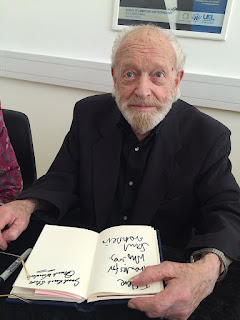 The queue for him was quite long, but I discovered it was because he was happy to spend a bit of time with each person as he met them.

He was old (a respectful 87 years old) and frail, but sharp as a button and happily posed for a photos as he signed my book.

It was an honour to shake his hand.

Of the rest of the guests today, here are the ones I got in my book: CHRISTOPHER BENJAMIN appeared in several Doctor Who stories: as Sir Keith Gold in Inferno, Henry Gordon Jago in The Talons of Weng-Chiang, and Colonel Hugh in The Unicorn and the Wasp. He also voiced Tardelli in the Big Finish Doctor Who audio story Grand Theft Cosmos. 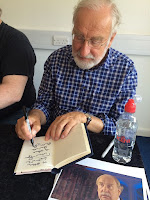 I had previously met Christopher when I interviewed him for a documentary about his work on The Prisoner tv series, starring alongside Patrick McGoohan. He remembered me, so it was nice to see him again. TREVOR BAXTER played Professor George Litefoot in the Doctor Who story The Talons of Weng-Chiang. He returned to the role in the audio story The Mahogany Murderers and the Jago and Litefoot audio series. When I was about to get his autograph I remembered I had got Angela Bruce at Gallifrey One this year, so quickly found the right page for him to sign alongside her.

While he was signing he asked where I had met her and I explained about Gallifrey One and how 3,500 fan attend. 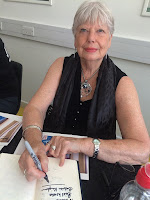 This caught the interest in the guest next to him, Barbara Kinghorn, who asked how she could get invited along! 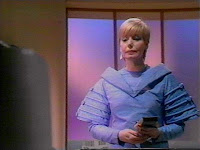 BARBARA KINGHORN played Timmin in the Doctor Who television story The Caves of Androzani. 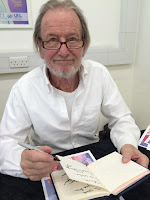 Next I spoke to Ronald Pickup, who was a well known name on BBC drama in the 1960s and 70s. I can recall him getting a Radio Times cover to himself.

RONALD PICKUP played a physician in the Doctor Who story The Reign of Terror. He also provided the voice of Kestorian in the Big Finish Doctor Who Adventure Time Works, and of Elder Bones in Spaceport Fear. 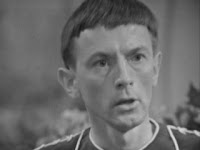 ROY SPENCER  appeared in two Doctor Who television stories of the 1960s. He played Manyak in The Ark and Frank Harris in Fury from the Deep. TIM PREECE played Codal in the Doctor Who serial Planet of the Daleks. 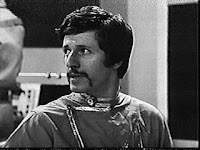 GEORGE LAYTON is best known for three television roles – Junior Dr Paul Collier in the comedy series Doctor in the House and its various follow-ups; Bombardier 'Solly' Solomons in the first two series of It Ain't Half Hot Mum; and as Des the mechanic in earlier episodes of Minder.

In 1969 he played a small role in The Space Pirates.

George was more than happy to sign my book!

SHIRIN TAYLOR played a camper in The Stones of Blood and a customer in Dragonfire. I had a nice chat with Tony Osoba. I asked him about the costume he wore for Destiny Of the Daleks, a creation by legendary designer June Hudson. He remembered it distinctly, as great care had to be taken not to get the costume dirty, especially while working on a messy sand pit for filming! 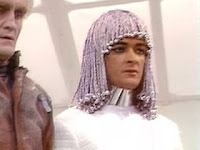 TONY OSOBA played Lan in Destiny of the Daleks, Kracauer in Dragonfire and Duke in Kill the Moon.

There were only two guests attending who were already in my book. There were: 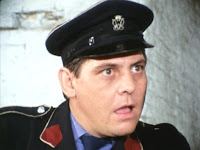 DERRICK SHERWIN who was script editor of Doctor Who from The Web of Fear to The Mind Robber. He was then producer from The War Games to Spearhead from Space, overseeing the transition from Patrick Troughton’s Second Doctor to Jon Pertwee’s Third Doctor; the production’s conversion from monochrome to colour; and the re-tooling of the series to a one of Earth-bound, present-day adventures. Sherwin is also an actor, with a several roles on television in the 1950s and 1960s. He made a cameo appearance in Spearhead from Space as a UNIT commissionaire.

REMI GOODING played Rupert Pink in the Doctor Who television story Listen.
Posted by Steven Ricks Tailoring at 11:03 No comments:

For those Fifth Doctor fans in the UK, there is a special offer intros weekend’s (Saturday 4th July 2015) Daily Mail that may be of interest. The paper are offering a, in their own words, a stylish Panama Hat for free (with multiple purchases of the newspaper - ah, there is always a catch) worth £19.99.

It does caveat the offer that the hat is Panama style, so not a genuine Panama-made hat.

But if you are after a cheap, but decent quality hat, it may be worth checking it out.

If you order one of these hats I’d love to hear how they look and if it was worth getting. Message me!

Posted by Steven Ricks Tailoring at 08:24 No comments: