I’ve been keeping an eye out on eBay, and I’ve come across some more original Fifth Doctor items for you this month.

Here’s what I found. 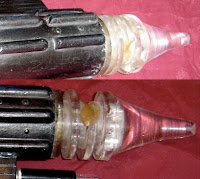 ORIGINAL prop gun used in the Peter Davison 1983 story Terminus.
Four of these guns were made, two hero light up versions and two static versions.

This is one of the static versions, although the power pack is removable.
(this is made out of an old jack plug with a female connector ........ typical high tech stuff from the BBC). 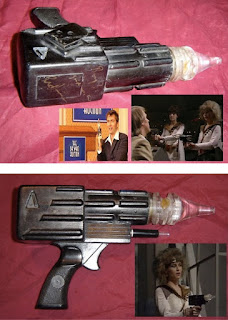 Gun is made of resin + fibreglass.
The previous owner had the gun autographed by Peter Davison.


The gun was also used by David Tennant for a sequence on Channel 4’s Friday Night Project that aired in 2007.

I also found some further eBay listings relating to other Doctors

Posted by Steven Ricks Tailoring at 10:20 No comments: