Over the past year or so I have featured the little break-out box articles that occasional appear in the Radio Times.

Annoyingly, a revamp of the design meant the feature was essential dropped, and none have appeared since.

This week, however, there was at last another mini-article, appropriately timed to appear on the 23rd November . . . 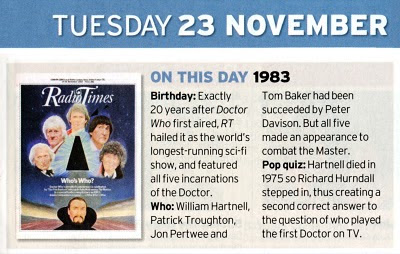 Posted by Steven Ricks Tailoring at 21:47 No comments:

As well as the auctions I have been to over the past couple of years, I have done a little digging back and found some further Fifth Doctor items from four sales from 2005 to 2008.

Lot 611
'Dr. Who': The Master's 'tissue compression eliminator' (miniaturising gun), the prop in black-painted brass with electric wiring, as used by Anthony Ainley throughout the 1980s in his portrayal of The Doctor's nemesis, 23cm (9in) long.

Lot 622
'Dr. Who': a Tardis roundel,
fibreglass, with traces of black and grey paint, indicating use in the Tardis of both The Doctor and The Master, believed to be the last surviving example from the original Tardis, 55cm (21½in) diameter

READ MORE
Posted by Steven Ricks Tailoring at 11:33 No comments: