This week I’ve been taking a little look at an area of The Doctor’s costume that sometimes gets overlooked: The Costume Transition Scene! 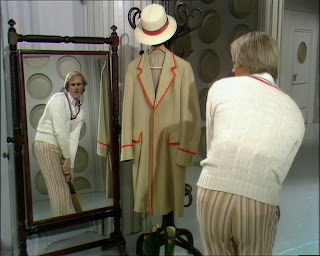 I’m taking about that moment in the first episode of a new Doctor where the old skin is finally shaken off and a re-designed costume helps define the start of a new era in Doctor Who history.

When William Hartnell became Patrick Troughton, it wasn’t just his face that changed – his costume miraculously regenerated at the same time (see right).

Later, when Jon Pertwee took over, his new clothes were more realistically introduced by having The Doctor lift them from the changing room of the hospital where he is taken at the start of Spearhead From Space.

But it was Tom Baker’s transition scene that was the first to make some play on the anticipation of what The Doctor would be wearing.

Looking through the list of regenerations, I have realised there seems to be two dominant scenarios for these scenes:

The Third Doctor steals the clothes of a hospital consultant before stealing his car as well; after the Eighth Doctor emerges from the morgue, he takes the clothes of a surgeon, who is going to a fancy dress party; the latest regeneration sees the Eleventh Doctor lifting a the parts of his costume from the hospital locker room as he strides through.
The TARDIS Dressing-up Room scenario 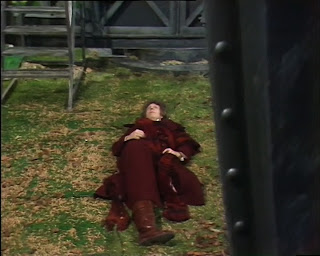 Before coving the nuts and bolts of the Fifth Doctor costume transition, I have to address the issue of the chronic continuity error covering the early part of Castrovalva.
In the closing scene of Logopolis (and the recap in Castrovalva) the out-going Doctor’s costume is established, with his long coat, scarf and calf-height BOOTS (see left). 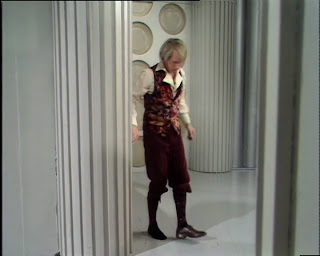 However, as soon as we start seeing Peter Davison wearing Tom’s costumes, he is suddenly sporting ankle socks and brogues! (see right) 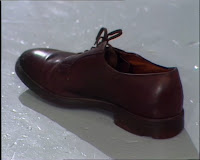 At one point there is even a close-up of the shoes after he takes them off! (see left)

Okay – got that off my chest – his slow discarding of the costume did give us a last minute look at some of the lesser seen parts of it, including the waistcoat and shirt (see below, top right & bottom left), before seeing braces (see below, bottom right), which I do not think we ever saw Tom wearing. 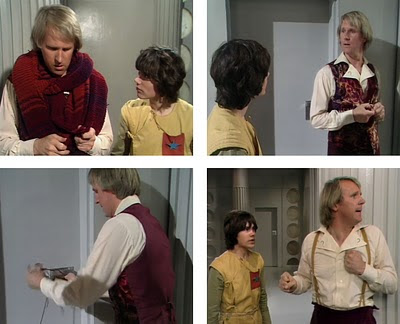 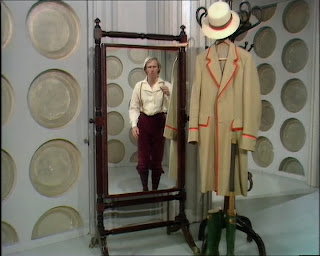 For me the reveal of new costume was a bit stagey, with it in a hat-stand beside a full length mirror (see left).

After finding out what he looks like, The Doctor dabbles with a recorder, a throw-back to the patrick Troughton era, before discover a cricket bat, and his own McGuffin. (see left)

The rest of the costume (shirt, trousers, jumper and shows) is then found in a cricket memorabilia room! (see right) – there really is a room in the TARDIS for EVERYTHING! 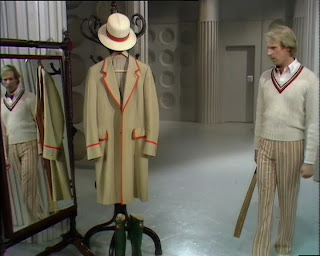 Finally his costume is complete, and after putting on the frock coat the new Doctor is with us! 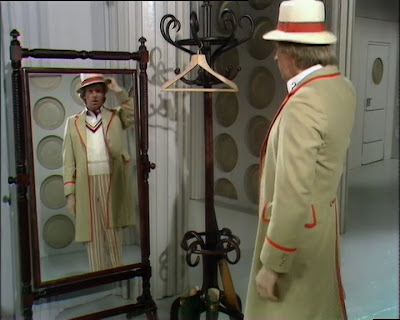 Posted by Steven Ricks Tailoring at 18:06