Okay, so, how’s it goin’, it’s me again. I suppose this would be part four in my series of customer reviews for that crafty limey Steve Ricks, so, that being the case, I guess it would be best to imagine one of those jump-cut pre-credit recap sequences which encapsulates everything that has gone before, but in this case, more specifically, my frock coat oddessy. Or, you could just click on my last review if you can be bothered, but it’s a long story and I recommend that you don’t. And, in any case, that long story is over now. 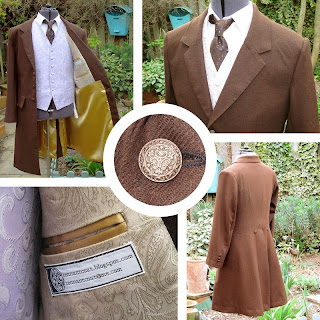 If you are familiar with my epic quest for the perfect frock coat, you will know that when last we met, I had apparantly achieved the holy grail, when that clever bugger Steve Ricks had made me my last one. You remember that one, it was brown on the outside, and had the most astonishing array of golds, silvers, paisleys and greens on the inside. It was like the TARDIS of frock coats. And, it seemed that I had finally come to the end of the Star Wars Septology-esque saga. But not quite.

I still had in mind one more coat, just one more, my final ever stab at the one frock coat I would own and wear for the rest of me natural puff. The brown version had been exquisite, without question. But the rich brown shell was a heavy tweed-like fabric (limiting it’s potential usage out here in the colonies), and the ball-seizing lining was so elaborate, that I felt I needed one that could possibly be slightly more conducive to day to day wear, especially here on Tattooine.

And lo, one day on Starship UK, that ingenious threadman Steve Ricks was sitting on his couch, probably saying, “Thank Christ I’m done with that Ian Cummins tool. Do you know, if I never hear from him again, it’ll be too ... (iPhone beeps) Oh, cock.”

READ MORE
Posted by Steven Ricks Tailoring at 19:59 No comments: