If you’ve been following my Six Costume blog you will have seen the Replica Cravats I have been working with some considerable success. I made them using fabric printed using Spoonflower, and have been offering them for sale for a little while now.
The screen used polka-dot cravats had been cut on the bias (diagonally across the fabric), so to make mine as screen accurate as possible, I planned out and cut mine in the same way. 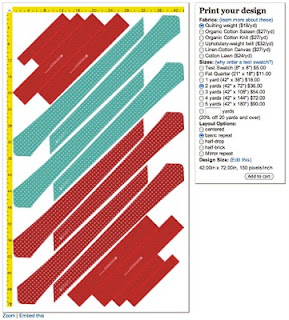 This can be somewhat wasteful on material as it leaves a triangle of unusable space top and bottom.
Rather than just loose this area I sneaked in a couple of test Five Hatbands, which just fit nicely in the space available.

Luckily my plan is to cut the hatbands on the bias as well, which means I can use the natural stretch the fabric has across the diagonal to allow the hatband to flex slightly as it goes around the hat, thus stopping it from standing vertically away from the hat at the top, despite being tight at the base.

I ran prototype Hatbands on an early run of Cravats, but it took a little while to get the scale of the design correct.

Peter Davison wears the hatband with two loops of the ribbon around the hat, stacked on above the other. The ends are disguised in a single loop of ribbon running around the band at the side of the hat (see above). 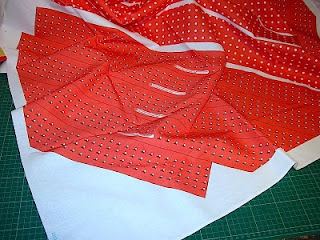 To start with, the most obvious thing to do was to sew two long lengths of the ribbon to go around the hat and find some way of securing them together. This proves to be quite fiddlely and not as easy as it sounds (see below).

If I plan to sell them, I need to make the finished product as easy to mount on the hat as possible. As I won’t personally supervise this, I want to avoid having frustraited clients struggling to get them to sit right on their hats.

Somehow I got the scale of the hatband a bit on the big side, but the principle was right. It then dawned on me that I could make BOTH bands of ribbon out of the same piece of fabric, sewn with a single line of stitch, with no danger of them slipping out of position with each other. 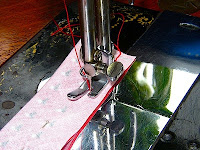 How I have done this is my little secret, but enough to say that now I had got the scale revised and correct, my new pattern will make it work.

So, after a few test, a number of prototypes, and some further practice, I have at last got a finished and very serviceable hatband (see below). 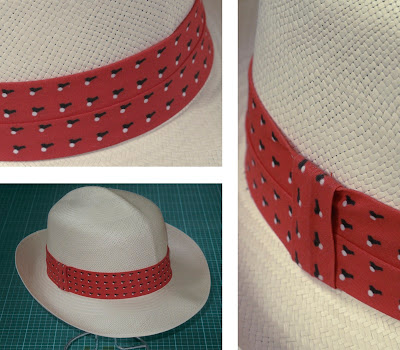 If you want to order a Five Hatband,
they are priced at GB£25. (Hat not included!)
Global shipping is included in the price.

Email me at tennantcoat@me.com
and I can send you full details.