I’ve been monitoring the various original fifth Doctor items on sale via eBay recently, and have started to notice a disturbing pattern... 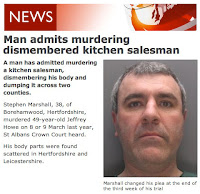 It all puts me in mind of a grisly murder a couple of years back where the dismembered body parts of the victim were found scattered across two counties!

Imagine my horror when it emerged the killer had lived barely a dozen streets from where I live in Borehamwood! 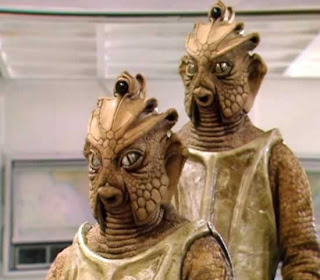 So the eBay listings for firstly chunks of the mask of a Silurian from Warriors Of The Deep, then later its arm and then a LEG made me think of that terrible crime.

Has someone done the deed in a Silurian and is slowly disposing of the body? Time will tell.... 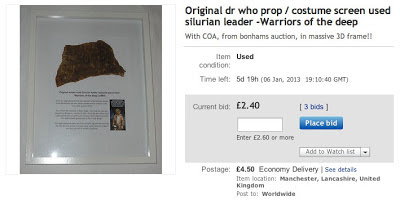 Warriors Of The Deep
framed piece of Silurian mask 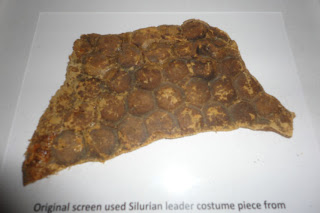 This is an unbelievable piece for all Dr Who fans.

Any props from the original series of Dr Who are rare, those from actual creatures are even rarer.

This is a piece from the 1984 story starring Peter Davison - Warriors of the Deep. These fantastic creatures are iconic and this is fondly remembered as the only time they returned in the original run of the series, 14 years after their first appearance.

This is an original piece from the costume of the Silurian leader from the famous episode which saw the return of these creatures, first seen in 1970.

This is from the costume of their leader. This costume was purchased in a Bonham's auction in 1991. The body was made from scales attached to a boiler suite, however the original costume has deteriorated greatly due to this crude design.

This highly detailed piece was from the left leg and was worn on the skin directly and as such was made with much more detail and has survived in perfect condition.

This is a once in a lifetime opportunity and is brought to you with no reserve - I only have one piece from each limb, so this is a real chance of a lifetime

This piece is presented in a massive 14 x 10 inch 3D display frame and come with a certifcate of authenticity from the doctor who prop experts from whom I bought the costume, who got them from the Bonhams BBC auction.

READ MORE
Posted by Steven Ricks Tailoring at 10:57 No comments: