Usually around this time of year I would be writing up all the wonderful items in the Summer Film and Entertainment auction at Bonhams.
Sadly this year it tragically disappoints with absolutely nothing on offer :(

The only remotely Doctor Who related item in the July 3rd Bonhams sale is a costume design/portrait of Sir John Gielgud by June Hudson.


To make up for this lack of Who in the UK, I’ve found a one-off item in a big Hollywood Prop sale at Premiere Props in the US - but don’t get too excited! 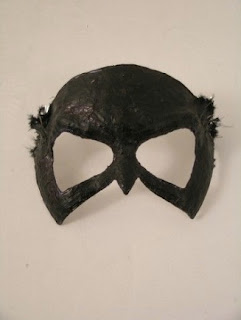 Lot 220. This is a Dr. Who mask from the TV series circa 1988. It comes from the infamous 1990 Bonhams London auction. The mask has been painted several times indicating use in various shows. The auction was sanctioned by the BBC and came from their costume warehouse that was sold off a few years later for offices.
Now, if you are a loss to guess where this prop comes from you’d be forgiven - I don’t know either! 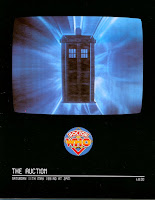 Is it a mask for an evil baddie? A disguise for The Master?

The only clue is the 1991 Bonhams auction (not 1990 as the listing stated) for which I have the catalogue.
I wondered if it was the mask worn by Nyssa in the fancy dress party from Black Orchid, but I’m not so sure now.

Does anyone have a clue?
If so - let me know.
Posted by Steven Ricks Tailoring at 18:37