After Bamfords nipped in earlier this month an stole Bonhams thunder, it’s now time for the summer Film and Entertainment auction at Bonhams in Knightsbridge.

There is a mix of new items; some items previously sold; and some items from previous sales that went unsold, now listed with lower estimates.

For the Fifth Doctor it is all new stuff which I haven’t seen at auction before, though the Earthshock helmet could be the one sold at Bonhams in 1992. 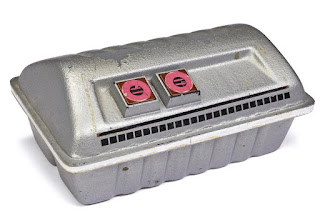 Lot 82
Doctor Who: A Cyberman Charge,

FOOTNOTES
According to information from the vendor, this was screen used in the 1982 story, 'Earthshock' and was made by model maker Bill Pearson.
Estimate £1,500 - 1,800 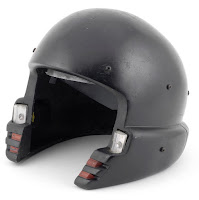 1982, moulded and painted composite, each cheek-piece with inset torch, inside of dome with plastic headpiece, with CoA from Movie Bits, helmet 25.5cm (10in) high
Estimate £700 - 800 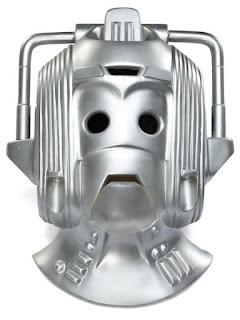 in silver-painted composite material, inside dome with foam, 17in (43cm) high

FOOTNOTES
According to information received from the vendor, this head began as a new style of Cyberman made by Jack Lovell for 'The Invasion', 1968, and was screen used in this story, following which it then had corrugated pipes added and screen used in 'Revenge Of The Cybermen', 1975. After this it was kept in the BBC archive until the early 1980s, when it was decided that the Cybermen should be completely revamped for their appearance in 'Earthshock', 1982. Richard Gregory of Imagineering was given the contract to design the new style of Cyberman and was given this 'Invasion/Revenge' Cyber head to work from. He re- sculpted the head by cutting areas out, adding details such as the eyebrows and ear sides, using items to hand such as metal, wood and filler. The final result was the head offered here: this head was then used as the master form for all Cybermen made during the 1980s. (The clear mouth and handle bars are later replacements.) Spanning three decades of the classic T.V. series, it is believed no other example of an 'Invasion/Revenge' Cyberman head exists.
Estimate £4,000 - 5,000