I’m getting quite into tracking down past Bonhams Entertainment auctions where Doctor Who items were sold.

It started with the 1991 Doctor Who auction, where dozens of costumes and props were up for grabs. I’ve since traced later sales where many times from the 1991 auction were resold, and some of these still pop up today from time to time.

A couple of weeks ago I found a Bonhams catalogue from 1994, containing 22 lots of Who-related items on sale.

Frustratingly due to the cost of producing print publications in the days, there are no photographs to illustrate the items on offer (every image would have had to be taken on film and processed, compared to the instant and cheap nature of digital photography today).

These sales also pre-date the internet, so finding the realised prices is near impossible.

Less care seems to have been taken in preparing the text in the catalogue.

There are a number of spelling errors and possible mis-titling of episodes, but since some of these are for pre-production scripts (and therefore possibly correct at the time) I have replicated the text here exactly as it appeared in the 1994 catalogue.


Here are just the lots relating to the Fourth Doctor era


Please note there are a number of spelling and title errors in the catalogue, which I have repeated here for accuracy as some may refer to early drafts of scripts

Lot 349 DR. WHO 1982 (Peter Davison)
A white ﬁbreglass hat (with clearly visible cracks) with net veil worn by Castrovalva (with sticker 'Lynn' on the inside crown).
Estimate £30 - 40 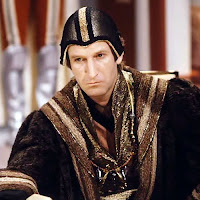 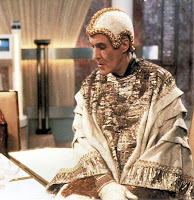 Lot 352 DR. WHO The Five Doctors 1983
A cream hat piped in gold, together with a pair of cream leather gloves with embroidered sleeves, worn by Lord President Borusa (Philip Latham), (3)
Estimate £30 - 40

Lot 353 DR. WHO The Five Doctors 1983-84
Part of the costume belonging to Turlough (Mark Strickson), one of the companions, comprising grey shirt with red narrow stripes, a black waistcoat, a red and blue striped tie, a black tie with pink and white stripes, and elasticated clip-on braces. (5)
Estimate £350 - 400 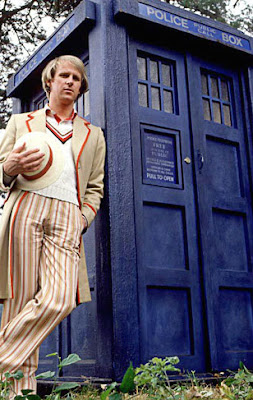 Lot 358 DR. WHO
A TARDIS Sign and casing of metal, wood and ﬁbreglass used during the John Nathan Tumer era of Dr. Who (1978-1989), together with the back cloth belonging to the TARDIS door.
Estimate £400 - 600
Note: The vendor informs me he acquired this lot at a Dr. Who auction in Saxmundham.

Lot 367 DR. WHO THE AUCTION, CATALOGUE
Sale of selected costumes from the wardrobe, on 11th May 1991. 41 page catalogue with black and white illustrations, colour cover, together with a list of prices realised. (2)
Estimate £10 - 20