Like a lot of Doctor Who fans, I’m booked to see the first performance of the Doctor Who Symphonic Spectacular this weekend at the SSE Wembley Arena.

I booked my tickets way back in July, so it’s been a long time coming but suddenly it’s barely a day away. 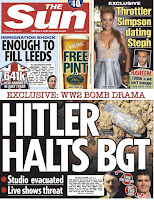 So imagine my shock to see the front page of today’s Sun newspaper.

I relates a story that the live semi finals of Britain’s Got Talent are in doubt due to the discovery of an unexploded Second World War bomb beneath a nearby car park! 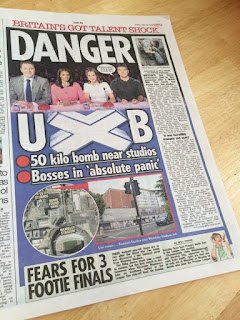 Before needing to read beyond the headline I happened to know that they shoot at a studios in Wembley, not far from the Stadium and Arena - so if Britain’s Got Talent is affected, then you can guarantee its gonna have an effect on the concert at the Wembley Arena too! 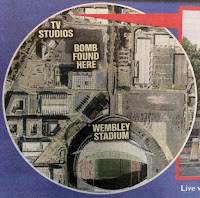 If you look on their aerial map, the Wembley Arena is the squarish building halfway between the BOMB FOUND HERE and the WEMBLEY STADIUM, slightly to the left.

Some further online research turned up the venue’s Twitter feed, which wasn’t too optimistic of my chances of seeing the concert this weekend. 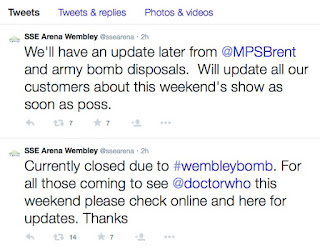 For some reason I now can’t get a picture of Captain Jack Harkness out of my mind! 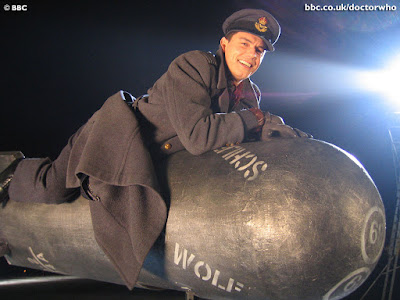 Posted by Steven Ricks Tailoring at 10:40