The Making of a Television Series

Last week I spotted what I hoped would be a great book on eBay. 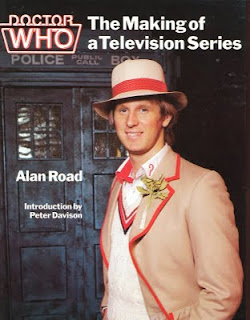 Published in 1982, it was called The Making of a Television Series, and goes behind the scenes on The Visitation.

It promised to cover just about all aspects about the making of the story, so I hoped it would give a decent insight to the costume department as it was in the 1980s. 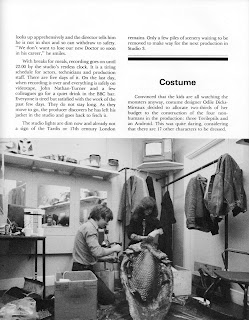 I was a bit disappointed then to find that although there is a section on the costume design, it is very minimal, concentrating mainly on the creation of the Terileptil costumes.

A photograph on page 49 (see right) shows them working on one of these. Look very closely and you can see the Android’s head, hands and feet on a top shelf!

We then find that the rest of the costumes came from Bermans & Nathans, so very little else was custom made for the story.

Sadly there is nothing about any of the regulars costumes and no costume designs or sketches, which would have been nice.

Anyway, you can download a PDF file of the entire book here:
The Making of a Television Series

Finally, here is the full text from the book covering the costume department’s work.


Costume Convinced that the kids are all watching the monsters anyway, costume designer Odile Dicks- Mireaux decided to allocate two-thirds of her budget to the construction of the four non- humans in the production: three Terileptils and an Android. This was quite daring, considering that there are 17 other characters to be dressed.


A science-fiction fan and admirer of Star Wars, she knew also that attempting to compete with what was on offer on the big screen would not be easy. “Trying to achieve something with a certain amount of originality with the kind of money that’s allowed and the kind of time available is difficult.”


First she showed the producer and director what she had in mind for the Terileptils, as these would be the most time-consuming to make. She considered what kinds of creatures had not been drawn on in earlier Doctor Who stories and decided that fish were the least hackneyed. “I had tropical fish in mind,” she says.


Having set in motion the construction of the Terileptils, she turned her attention to the Android, the next most complicated costume. “That I designed in about a week, relying on armour and some 1930s references," she says. The script said that the Terileptils love beautiful things, so she felt that the Android ought to look like a piece of sculpture rather than something menacing. The idea of the inlaid precious stones came from the glowing bracelets with which the monsters enslave their victims.

*  *  *  *  *
Next she gave herself a week to research the 17th century and find as many visual references as possible. She had studied theatre design at college, but after working on contemporary plays, needed to brush up on her history. Armed with the names and sizes of the actors who had by then been cast, Odile Dicks-Mireaux visited costumiers such as Bermans & Nathans and the National Theatre, which also hires out costumes from its enormous store.


If the costumes were rather too immaculate for her purposes, they were subjected to a certain amount of creative crumpling and tearing. When they have all been made to her satisfaction, she sometimes has to agree to changes in order to suit individual actors’ preferences. For example, Odile Dicks-Mireaux wanted most of the actors to wear hats, because it was unusual for men to go bareheaded in the 17th century. But one actor declined to wear a hat obtained specially for him. “You win some and you lose some," she says.

Posted by Steven Ricks Tailoring at 21:22