As well as the auctions I have been to over the past couple of years, I have done a little digging back and found some further Fifth Doctor items from four sales from 2005 to 2008.

Lot 611
'Dr. Who': The Master's 'tissue compression eliminator' (miniaturising gun), the prop in black-painted brass with electric wiring, as used by Anthony Ainley throughout the 1980s in his portrayal of The Doctor's nemesis, 23cm (9in) long.

Lot 622
'Dr. Who': a Tardis roundel,
fibreglass, with traces of black and grey paint, indicating use in the Tardis of both The Doctor and The Master, believed to be the last surviving example from the original Tardis, 55cm (21½in) diameter 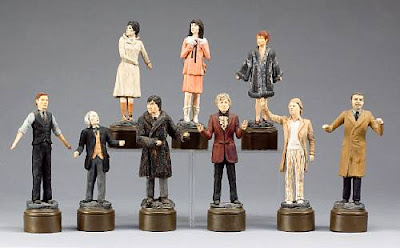 Lot 628
'Dr. Who': nine miniaturised character figurines,
a unique set made for the 20th Anniversary Special edition, 'The Five Doctors', comprising the First, Second, Third and Fifth Doctors, Susan Foreman, Sarah Jane Smith, Tegan Jovanka, the Brigadier and Vislor Turlough, each in painted modeller's clay on circular metal base, one damaged during filming, the tallest 23cm (9in) high


Footnote:
Broadcast in the UK on 25th November 1983, this anniversary edition was actually premiered two days earlier in the US.
Sold for £3,600

Lot 630
To be sold to benefit The Great Ormond Street Hospital Children's Charity: The Dalek Supreme (aka The Tussaud’s Dalek), 1970's the painted wooden body applied with plastic hemispheres and mounted with exterminator gun and suction arm at the front, the swivelling dome section with flashing lights and articulated eye stalk 160cm(63in) high

The dreaded Daleks are perhaps the most popular of all on-screen villains ever created by the entertainment industry. The Tussaud’s Dalek offered for sale today has developed a complex provenance of its own.

In 1979, four Daleks were required for the BBC Dr. Who story, Destiny of the Daleks‚ starring Tom Baker. The BBC production unit had no budget to build new props so had to make use instead of three old 1960s Daleks along with four so-called Goon Dalek props made for the filming of Planet of the Daleks‚ in 1973.

One original Dalek was butchered to provide moulds for vacuum-forming more Dalek parts. Two of the four Goon props were in such bad condition they were scrapped, and the base section of one of the others was badly damaged. Consequently, the BBC unit found itself with two 1960s Dalek props, one Goon‚ and only the top half of another in useable condition.

The BBC had previously made an exhibition Dalek which was now used to make up the shortfall. The good top half of the Planet of the Daleks Goon‚ was then grafted on to the exhibition Dalek skirt and so this Dalek was born! An interesting point is that this evil entity was blown up‚ in Destiny of the Daleks, by a pyrotechnic fire flash, the scorch marks still remaining visible under the prop’s interior seat. It was subsequently repaired for future use.

After Destiny of the Daleks ‚ this prop passed to Madame Tussaud’s Waxwork Museum to accompany the figure of Dr. Who actor, Tom Baker. It was displayed there from 1980 until summer 1981, painted in its unique blue, silver and black livery in which it featured on the front cover of the Radio Times in 1983 for the 20th Dr. Who Anniversary.

No other Dalek was painted in these colours. The specific shade - traced recently - is Porsche Riviera Blue and surprisingly can apparently only be mixed to order. Meanwhile this prop’s period on display earned it the name by which it has subsequently become known – “The Tussaud’s Dalek”.

In February 1984, it was re-painted black with white hemispheres to feature in Resurrection of the Daleks as the Dalek Supreme. It was then featured in promotion for this story‚ having been again painted in the standard dark grey of normal Daleks in which form it had also appeared briefly during the fight sequences in the last episode.

In March 1985 it made its final TV appearance, in Revelation of the Daleks.

The Tussaud’s Dalek was sold in 1986 as part of a BBC charity auction, for the Red Cross Sudan Appeal, to a private UK Collection where it has remained since. Unfortunately it had been very badly refurbished for the Sale, losing many original features and was painted an incorrect pale grey.

In 2004, following extensive research, it was painstakingly restored to its correct Tussaud’s display form, with the addition of a voice-box.

Distinguishing marks today:
1. The Tussaud’s Dalek skirt is block-board and ply, unlike the other Daleks which wore fibreglass skirts.
2. The skirt has a similar angle at the back and front
3. The skirt has an extra lip around the bottom of the skirt section
4. The hemispheres are 4.5-inches in diameter. All other Daleks featured 4-inch diameter hemispheres.
5. The misalignment of the hemispheres is unique and makes this Dalek easy to track from one story to another.
6. The shoulder section had four bolts around the oval until it was refurbished in 1986 - the lower right bolt was larger than the other three.
7. The Tussaud’s Dalek has three rows of bolt heads between the hemispheres on the skirt. These were actually filled prior to the refurbishment and have been subsequently reinstated.

Thus the Tussaud’s Dalek is an entirely unique example of the breed, and seeks a good home, without threat of extermination.

Lot 251
'Dr. Who': a Tardis roundel,
fibreglass, with traces of black and grey paint, indicating use in the Tardis of both The Doctor and The Master, believed to be the last surviving example from the original Tardis, 55cm (21½in) diameter

Lot No: 260
Dr. Who 1983The Five Doctor's Script
An early draft of the Five Doctors episode with unfilmed scenes by Terence Dicks, with corresponding shooting schedule. 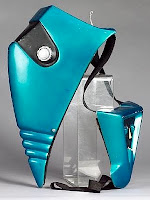 Lot 269
Dr. Who 1983 Space Back Pack Episode Enlightenment
From the Peter Davison era a Blue fibre-glass back pack. Name tag for Reg Woods.

Lot 285
Dr. Who 1982
Lace Collar from the Episode Kinda
Peter Davison as the Doctor, lace collar worn by Anna Wing as Annatta from the episode "Kinda" 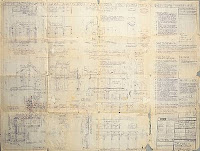 Lot 292
Dr. Who 1982 Castrovalva Set Blueprint
From Peter Davison's first episode as the Doctor a blueprint for the set designed by Janet Budden.


Footnote:
This costume, although worn by Peter Davison, was used for exhibition and promotional purposes and did not feature on the television series.
The fifth Doctor had to have a complete new look, with his young face, innocence and yet age old wisdom Peter Davison was dressed as an Edwardian cricket official with a stick of celery on his lapel.
Sold for £5,040 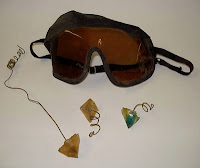 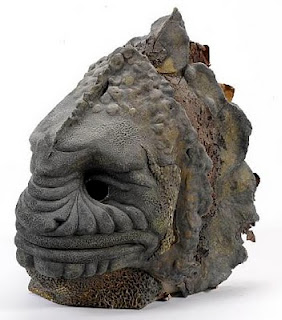 Lot 270
Television - Dr. Who
'Dr Who': Tereleptil head (original Blue Face) from the Peter Davidson story 'The Visitation',
latex mask, together with a letter of provenance from Dave Wilcox SciFi, 14in(36cm) high