Resurrection Of The Locations

Well, I’ve successfully retrieved Bob Mitsch from the baggage re-claim at Heathrow, and even before he checks onto his hotel we are already on a location trek across parts of London.

So, after depositing all his luggage at a left-luggage place at Kings Cross station, we set off on our journey. 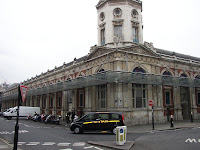 We are aiming for Butlers Wharf near Tower Bridge, so it’s a question of what locations are en route.

First up is the old Smithfield Market (see right), outside which some scenes were shot for Invasion Of The Dinosaurs. It was on locations such as this that some wobbly dinosaur models were carelessly CSO’d on unstable backgrond plates.
Still, it seemed scary at the time. 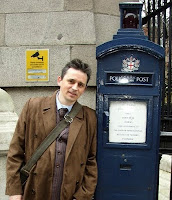 From here we walk to St Martins La Grand, an unusually named street bordering on the City Of London. Although nothing was actually shot here, it’s the site of one of the few last remaining original Police Telephone Posts (see left).


UPDATE
When I conducted this tour I thought there were only two surviving Police Posts in London.
I have since discovered that there are a lot more.
You can read about all of them under Eleven TARDISES For Eleven Doctors

It is then a short walk to St Pauls Cathedral, outside which a fake Who exhibition was mounted for an episode of EastEnders.
It is also of course the location for the closing scenes of The Lazerus Experiment, though another cathedral doubled for St Pauls in the broadcast episode. 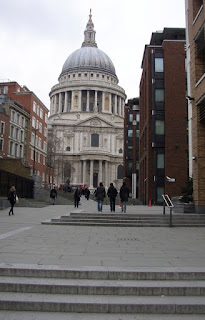 Tenative I know, but just round the corner is where the Cybermen famously marched down the St Peter’s steps. Sadly the steps were demolished to make way for the landfall of the north end of the Millennium bridge, which takes you over to the Tate Modern building.

Just down river from The Tate is The Globe Theatre, a real Who location, having been used extensively in The Shakespeare Code (see below). 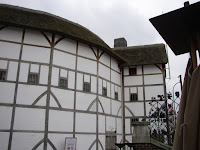 We then get back on track and head direct to Butlers Wharf, where the exteriors for Reserrection Of The Daleks had been shot.

I have a particular fondness for this striking location, as I went to seek it out at the time of broadcast. I got to see it in all it's decaying glory just as it appeared on screen.
The 1980s was a hayday of screen appearances for the Wharf, having appeared in Plenty with Meryl Streep; Ellis Island with Richard Burton; Bleak House with Diana Rigg; Jamima Shore Investigates with Patricia Hodge; The Elephant Man with John Hurt; the BBC version of The Invisible Man; an episode of Hammer House Of Mystery And Suspense, but to name a lot.

On various occassions I managed to get on set while they were filming and met Peter Ustinov playing Hurcle Poiroit (see right) in Thirteen At Dinner (a tv adaptation of Lord Edgware Dies). Also in the cast was Peter Suchet, playing for this production Chief Inspector Japp, all long before he donned the detectives moustache, a part he STILL plays!

I also got to know the caretakers of the Wharf and wangled a chance to go inside and up onto the famous walkways that span the street.

Sadly the light was fading, so the shots I took were not very clear.
But to make up for that, here are some images I took in 1985 of the Wharf, when it still looked as it did in Resserecion Of The Daleks. 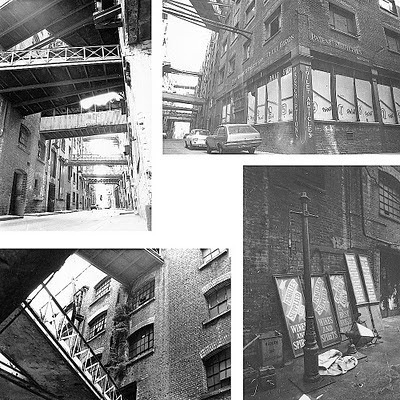 Posted by Steven Ricks Tailoring at 21:53