I have been working on the Five Coat on and off for a few weeks now, having taken a number of breaks to clear some garment commissions.

I recently had my first go at some of the piping on the coat, doing one of the pocket flaps as a test.

I simply pinned the piping around the flap and hand stitched it in place, finding it a lot easier that I had dreaded! (see above)
I also had a go at piping the sleeve, though in a different way this time. First I made my sleeve as usual, but only sewed the shorter front seam together. I then worked out the level of the piping and lightly marked a pencil line on the calico. I then machine stitched the bottom edge of the piping to the sleeve, which worked very well (see below left).

So the piping would match the lapel and pocket flap edges, I then folded it in half (see above middle) and stitched the other side down too (see above right). 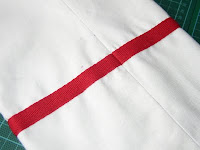 When the back seam was sewn, the piping lined up and the join was on the back of the sleeve out of sight (see right).
All this was certainly easier than I had feared, but now I had broken the ice with piping, I had to face up to another little problem I had been putting off.
Each time I have returned to the coat I have progressed it a little further, but I have equally been finding issues and problems with the pattern I was developing. 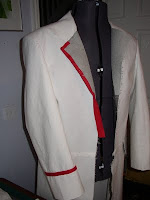 Although I have nailed the back and am happy with how that comes together, I have been struggling with the front, which despite looking good, when it is worn there is a excess of fabric below the arm. (see left) Nothing I was doing to take this in was working, and I found the original shapes from the Buckaroo Bobbins pattern did little to improved things.
Time for some drastic action.
It’s at times like this I find the best thing to do is to take a park what I have done so far and take a dramatic step sideways. 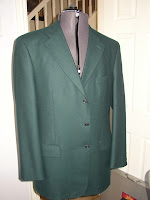 The way I plan to do this is to take a bit of inspiration from a friend, Lisa, who is a self-confessed charity shop scavenger!
I went down my local high street and took a look at men’s jackets that were single-breasted, with lapels of the right size, and had a similar upper body shaping to the Five Coat.
I quickly found a M&S jacket that fitted the bill - and it only coat me £6.99!

If you are a cult-tv fan, you might be amused to know I bought the jacket in the Borehamwood branch of Dr Banardos (see left top). In the 1960s this shop was a hardware store called Janes & Adams, and it appeared very briefly in The Girl Who Was Death episode of The Prisoner, when it was used as the exterior of the Magnum Record shop (see left bottom).
Borehamwood high street frequently pops up in the ITC series of the 60s, mainly because a lot of them were filming at the ABPC Elstree studios only a stones throw away.

I got the jacket home and after studying it, proceeded to start taking it apart to plunder its pattern. I only need to take one side apart for the pattern, so kept the other intact for reference. 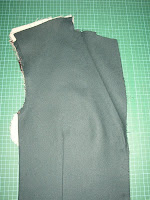 Laying the salvaged pieces over my paper pattern soon highlighted the problems and how to solve them and I was able to incorporate these revisions with little effort.
The correction needed was so deep routed though it required me to start a new calico test from scratch.
This time I think I am ready to start making what will be the FINAL calico test for the five coat!
Posted by Steven Ricks Tailoring at 18:01