First thing I need to do is check that what I have transcribed from the Buckaroo pattern is sizing up correctly. It is also good to have a dry run to understand how the coat will go together and iron out any problems I may encounter. 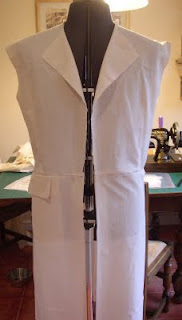 Time to do another trusty calico test!
I must admit that when I first started making Tennant Coats, I was so desperate to have the finished result there and then, I would storm in and design on the fly as I was cutting final fabric and correct for any inaccuracies as I went along. I always knew calico tests were what I should be doing to start with, but it was only when I was getting ready to cut the £75 a metre Alcantara, that I stopped myself and went down the calico route first.
I found it very useful and it encouraged me to transcribe a proper pattern which I then have if I want to make another. I would now never do a coat any other way.
So, for the Five Coat I quickly cut the pieces that form the body of the coat, as well as one of the outside pockets as I want to get to grips with this unusual method I am not familiar with.
Version One
It was easy to follow how to put it together and within an hour I had a wearable shape I could test. There were immediately a number of issues I could see with the pattern that would need to be fixed: the fiddle-back was pushing the buttons too far apart (see below, top left); the underarm area was not as fitted as I would like (see below, top right); the seam on the shoulders was angled backwards more than I would like (see below, bottom left); the skirt was not as full as it should be; and the pocket flaps were too small (see below, bottom right). 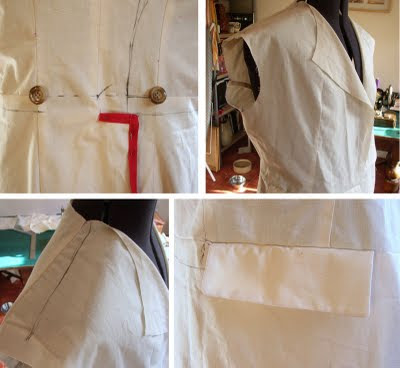 Version Two
I put the first version on my tailor’s dummy and could mark onto the fabric the changes I wanted to make, which I translated back to my pattern, reshaping it as I went.
I reduced the base of the fiddle-back, bringing the buttons closer together (see below, left); re-angled the shoulder seam to run straight (see below, right); added some fabric to the skirt; and sized the pocket flaps up by about a quarter.

When I put this test on the dummy I pinned some of the piping to the rear split and I think I got the buttons too close together, so that needs to be fixed; the shoulder seam is now fine.

I then turned my attention to fitting the sides, which were badly gaping (see above, left). I first pinned the middle of the panel to pinch in the fabric to see how much needed to be taken out (see above, middle). I had seen in a picture that on the real coat this panel should be in two parts, and this I realized was the reason.
It is not just a simple case of cutting the panel in half, because I need to include seam allowance for this new seam.

I took the existing pattern for the panel and drew a pencil line along where I wanted the new seam to be (see far left). I then traced over each of the new halves, adding seam allowance over the pencil line at the top and bottom, but curving in to go tight and over the line in the middle. This produced the two new pieces, which when laid together show a gap in the centre (see left).
Once I cut these in calico and sewed them in place, the side fitted a treat (see above, right).
Elsewhere in the test, I thought the skirt was hanging too straight and was not flaring enough.
time to move on to a new version.
Version Three
Through all the cutting and recutting I thought it a good idea to cut a new test to clean the slate and add in some further adjustments. 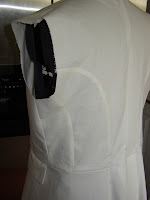 This time round I curved the skirt so it flared properly (see above); the pockets are now a better size; the revised side panels are fitting nicely (see left); the base of the fiddle-back is wider, though not as wide as the first version. I have, however spotted a school-boy error on my part. The pattern has an overlap across the back, around which the piping is attached.
This dog-leg starts at the middle seam, and now I have it wider to give space for this, the buttons feel too far apart (see right).

Reviewing a picture of the back of the real coat, I now see the dog-leg starts to the left of the middle seam, so I have widened it just a little too much (see far right). Looking back over all the versions, my dog-leg is too far to the right and should be centered between the buttons. I need to recut this part to be a bit narrower and find a way to cut the dog-leg to start left of the centre seam.
These three versions were quickly knocked together to establish the pattern and resolve any obvious problems, which they have certainly done.
The amends I now need to do are all manageable, so I think it is time to move on to a new, more finished version of the calico test which will be a full dry run and be fully lined.
Check back soon to see how I get on.
Posted by Steven Ricks Tailoring at 11:50